Icee (Dumbells & Deli) and I wanted to destress from all the problems we had. Most of it from our School finals. We want to go somewhere. We were bored of the city life and prefers to be out in the wild.

Icee has a goal this year. She’s turning 21, which gave her the idea of climbing 21 peaks. It’s a little bit shady since we’re 4 months in and she hasn’t even started. That’s why we wanted to trek somewhere over the weekend to start her goal and get some fresh air.

We didn’t have a clear game plan per say. Until Jala (JaLastSupper) came in into the picture and suggested some places we could go. The final decision was to eat somewhere for lunch, have some coffee afterward and for Icee’s cravings, trek a peak.

Jala has been telling us about a new restaurant he discovered in Carcar city. It’s a Filipino-Chinese restaurant and rumor has it that the chef used to work in famous Chinese restaurants in the city. Knowing that must mean that their dishes are really delicious. Needless to say, our expectations are elevated.

The place is called 1878. This Filipino-Chinese restaurant got the name from its house number. It is also coincidentally the year the ancestral house was made.

We ordered their steamed rice first. It’s their best seller. Evidently, there’s a reason why it’s selling like hot pancakes. It’s mouth watering. The aromatic smells once you open the pot helps too. The best part? It’s priced at only Php 35.00. That alone will fill you up and leave you on a full stomach.

We’ve also tried other dishes on the menu. We’ve had their Shanghai Rolls, Pancit Canton, Chicken Cordon Bleu and Chopsuey.

Everything we’ve tasted was nothing short of appetizing. 1878 was all out. Clearly, the food is their strongest asset. People will definitely go here time and time again. I know I will whenever I’m in Carcar.

It was raining the entire time we were in Carcar. We decided to ditched our trekking plans for our own safety. The weather wasn’t cooperating. But we were too delighted for the weather to spoil our day. It was then and there we decided to go food-hopping instead.

Jala, being the sharp minded person in our group when it comes to finding perfect places to eat, suggested trying Cafe Terraza. The coffee shop is just a tricycle away from 1878 and has a view of Carcar’s rotunda. It is rightfully named because it sits on a rooftop of a 2-storey building.

We just had a scrumptious meal from 1878 that ordering another from Cafe Terraza would mean gluttony on our part. Drinks were needed. Each of us ordered one. Jala, bought his Iced Americano. Icee had a White Cafe Mocha. And because I have an immensely desire for Matcha all the time, I ordered an Iced Latte with an extra shot of matcha.

It was perfect for the afternoon. Especially for us who woke up way too early to get the day starting. Just mix your drinks first. I got way too excited to drink mine that I forgot to mix it beforehand. Ended up taking one huge sip of a matcha shot. Not good, believe me.

Midway through relaxing at the rooftop, the rain suddenly stopped. The sun was back in its position and we were second guessing if we should push through with our trekking plans. Our eager souls were busting in and took control.

In a matter of 1 bus ride, 1 motorcycle trip away from Carcar city, we were at the start off point and ready to trek. It took us 2 hours from Carcar City. Traffic is to be blamed for that.

We were behind schedule. It’s practically late to go trekking for the day. Most daytime hikers were already going down the mountain. But for us? We were just starting. It was an impulsive decision on our part. The supposedly one hour or more trekking time was squeezed down to just 30 minutes. We were literally chasing sunsets.

That was a mishap on our part. We crossed out our plans on trekking because of the weather. For the same reason, we placed it back in on our itinerary.

Mt. Naupa is not something new for me. I’ve followed fellow bloggers, Scampering Soul Scamper, Four-Eyed Laagan, Wandering Feet Ph and Chasing Potatoes and The Fickle Feet who have been there before. I actually followed Chasing Potatoes’ blog for the trek since her trip was the most recent.

The mountain is an easy trek. Truly a good place to practice hiking before going on a major climb. But for us inexperienced trekkers, who had to quicken our pace, it was excruciatingly hard. Icee didn’t make it on the peak. Jala and I barely even made it. We were panting so hard. The most important part though is the view. We were both screaming from exhaustion but mostly for conquering the peak.

Even though our knees were trembling and in pain, we still took pictures. We didn’t capture any good shot. The sun already went down and is hidden behind the mountains. And since it’s getting dark, we stood there for just 5 minutes. Would’ve stayed longer if it only we trekked earlier. Besides, we have a more struggling trip ahead of us. Trekking down with shaking knees isn’t good especially if you haven’t even barely rested. But the night is upon us. We don’t want to trek the mountain down any later than that. We only had our phones as flashlights. And again, a stupid decision on our part.

We had a good time. Good is an understatement. We had an awesome day. We squeezed in a lot of things for just a day. And not a moment must be forgotten. And the best part? It was all for less than ₱500.00. Since this is a very long post, I’ll write a guide in another post to summarize this day. For now, I’ll sleep. 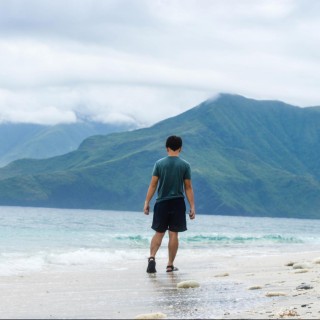 I Travel | I take Photos | I Blog about it. Watch me travel the entire Philippines, One island at a time.

Follow RADYSETGO | searching paradise in every form on WordPress.com